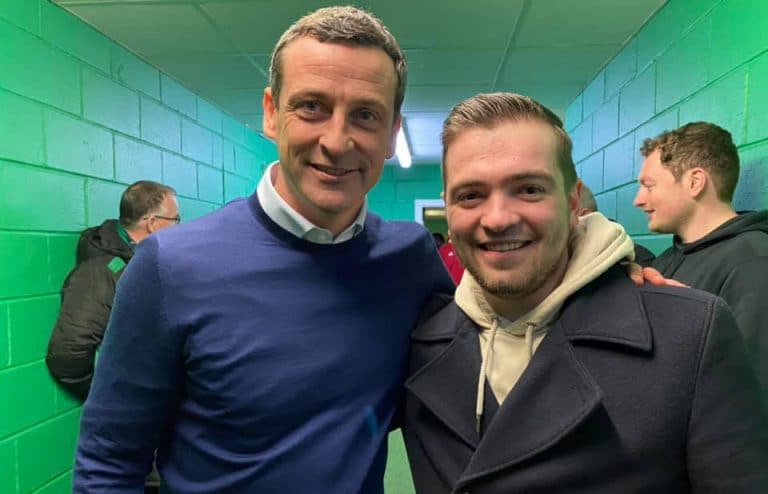 Calum Peat was in hospital due to mental health problems when Libby Emmerson, founder of Back Onside, reached out.  3 years later, he is in a much better place thanks to the charity, his family and a special football club close to his heart.

He said: “It was Libby who basically rescued me. In December 2018, I was hospitalised in the Isle of Man and I was tweeting stuff about Hibernian.

“On New Years Day, Libby found one of my posts and reached out to me. I’ve been in contact with her almost everyday since then but I had no idea about the charity until she messaged me.

“She was alerted by one tweet but looked through them all and she could see I’d been in hospital with mental health issues. She sent me a private message before calling me the next and within two weeks she visited me on the Isle of Man. She goes above and beyond to help people.

“She visited me in hospital on the Island and when I was moved to Essex in March 2019, she still came down to visit. She’s not just been a huge help to me but also my family. I often think that it’s too good to be true because the amount of time and effort she’s invested in me is truly amazing.

Despite moving to the Isle of Man before his second birthday, Calum is proud of his Scottish heritage and remains obsessed with a football club based in the city of his birth, Edinburgh. Hibernian Football Club holds a very special place in Callum’s heart.

On the 21st of May 2016 at Hampden Park, the scene of the club’s most memorable win in recent history, jubilant Hibees blasted out the iconic “Sunshine on Leith” after winning their first Scottish Cup in 114 years.

The Proclaimers anthem, now synonymous with the club, resonates with Calum. Easter Road can be a sanctuary, a place where a fan can escape the troubles and pressures of life for 90 minutes.

Hibs played an important role in Calum’s life and, knowing this, Libby arranged for two of his heroes to get in touch. Although neither still patrolled the dugout in Leith, Neil Lennon and Alan Stubbs both took the time to pick up the phone and the impact those conversations had on his recovery is immeasurable.

“Libby knew how much I loved Hibs so she passed on my number to Stubbs. It didn’t seem real at the time, speaking to someone you class as a legend but he said he was just doing his job.

“We spoke for about 45 minutes and he was asking about my life. We discussed the Scottish Cup final win and I quizzed him on the starting eleven and the substitutes he brought on. He managed to get them all correct except from Niklas Gunnarsson, who came on as a sub.

“Neil gets a bad reputation from people but they don’t appreciate how much he does for mental health charities. He was out a walk and spoke to me about Hibs but we talked about mental health more.

We were discussing how the illness doesn’t discriminate. You can suffer from it no matter how successful you are or how much money you’ve got. It gives you hope that you can get help if you reach out and speak to people which can be the hardest thing to do.” Peat, added.

The club also helped when they offered him the chance to become co-commentator alongside Cliff Pike for the Scottish Premiership clash against Hamilton.

He said: “Cliff reached out and encouraged me to get in touch once I was out of hospital. He said to come to Easter Road and he’d take be to the commentary booth.

“I thought he might have just been saying that to make me feel better but I’m so grateful that he kept his word.I had no idea that I’d be on duties, I thought I’d just be standing there and listening in.

It was such a good day. We went behind but eventually won and although it was a cold night, it was worth it. I was very nervous about doing it but Cliff made it so easy for me, it was like I was just having a chat to a friend. It’s hard not to be too biased on commentary, you couldn’t see me celebrating the winner but you could probably hear it.

A lots of Hibs fans follow me on twitter and they got in touch with me to say I was amazing. It was nice to get those well wishes.

The opportunity arose just two months after Calum was discharged from hospital. He had returned to Scotland to spend time with his two families; football and blood – of which he now includes Libby.

“People think that it’s only football but it’s so much more than that. You spend a lot of money following them week in and week out which can be difficult especially when they get beat most of the time.

“When they first replied to me on twitter, I thought that was the best thing that could ever happen. That led to strangers messaging me and wishing me all the best.

“If you don’t have charities like Back Onside then suicide rates would be through the roof. If you can get donations, no matter the amount, then it’s a massive help to Libby. She deserves it so they can provide the support that people deserve.

I can’t put into words what Libby has done for me, I’ll never be able to repay her. She’s part of my family now, she stayed with my parents when she visited and joined in all the shenanigans. My parents supported her on the Kiltwalk to raise money for Back Onside,” expressed, Peat.

Calum has been discharged for almost three months now and is enjoying the freedom of living in his own place for the first time. Living closer to his family has eased that transition and he appreciates how beneficial a good relationship with family can be for your mental health.

He said: “All my family are up here whether that be in Livingston or Ayrshire and my mum, dad and sister are in the Isle of Man.

“When I was in hospital in Essex, I was the only patient who got any visitors. There was a fellow patient whose family lived just five minutes away and they never visited. It puts it into perspective just how lucky I am to have my family around me.

“I don’t know where I’d be without my mum and dad. They struggled with it, we had family therapy which was difficult at times. It was tough on them but they still got the boat over to Liverpool and travelled down to Essex every fortnight.

“My parents are concerned about me during lockdown but I’m in a better place now as before I wouldn’t want to worry them. I didn’t want to upset them but now it’s easier to talk to them, I can tell them anything.”

Calum can’t comprehend the extent of Libby’s support and she’s helped put him in touch with more of his Hibernian heroes.

“Tam McManus messaged me and said I could grab a pint with him whenever. With no football currently it’s difficult to do that but I’d love to take him up on his offer one day.

He was part of one of our best teams in recent years when all the young players broke through. We were the best team in Scotland outside the Old Firm and he was a cracking player.

Marvin Bartley called while he was still at Hibernian and he was a proper nice guy. We’ve kept in touch on social media although it’s a shame that he’s left the club now ” Peat, concluded.

Opening up and admitting you’re struggling with your mental health can be the most difficult part of the journey to recovery. People can be empowered by seeing their footballing heroes break the stigma of mental health. After all, it’s more than just a game.

Sign up for our newsletter to stay updated with our latest fundraisers, stories and partnerships. We won’t spam you — we promise!

How to help others

How to help others